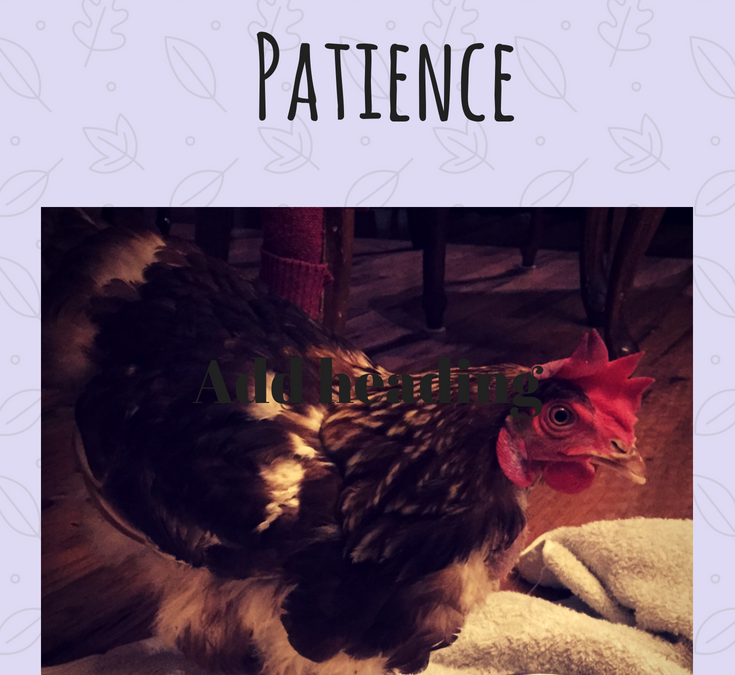 On his birthday last fall, my oldest son was given a chicken by a good friend of his.  This friend knew he had been wanting chickens for a long time but had been told to wait until we had the right land for them.  Now that we did, he figured this would be the perfect gift.

Except for the fact that we had nowhere at present to keep the chicken.  So plans were made to build a coop.  My husband and son spent their free time on the weekends building this coop.  It took awhile as fall and winter brought early sunsets and its fair share of unaccommodating weather.  So, in the meantime, the chicken, affectionately named Woodchip, was housed in a pet carrier in our house at night and, as our yard is not fully fenced, on a leash outside during the day.

Over the course of time, Woodchip became like part of the family.  Every morning as the light went on in the kitchen, she would begin to balk at me telling me it was time to go outside.  I would say, “Good morning” and “you have to wait for Nicodemus.”  Caring for her became part of his routine.  She learned the routine, too.  Every morning when he came down and began to put his “chicken shirt” on (he’s kind of a germaphobe) she would get excited and start dancing around in her cage like a puppy.  Who knew that chickens did that?!?  On days when we would let her roam free without a leash, she would follow Nicodemus around everywhere, and run after him when he would set her far from the house.  She knew that our house was her home as she would always make her way to the back door and just stand there as if to say, “let me in, I’m cold.”  We all loved Woodchip, and she loved us, especially Nicodemus.

Because our yard is not fully fenced we had to keep a look out for the occasional dog that would get loose and attempt at an easy meal.  I had saved her from such a fate once already.  Last week it happened again.  A dog got loose and broke through the back fence separating his property from ours.  However, this time I was too late.  By the time I noticed, Woodchip was already lying on the ground with the smiling dog standing over its prize.  I rushed outside to find my son’s sweet pet lifeless and this large black dog wagging his tail and looking at me, clueless as to what he had just done to us.

A flood of emotions overcame me — sadness and anger among them.  I was furious at this dog who was staring at me as if I was his friend.  Then it happened.  I heard the dog’s owner call him, “Harley!”  The sweet voice she used seemed to mock my pain.  Then her hand stuck through the freshly made hole in the fence as she beckoned him home.  He ran to her and jumped back through the hole into his yard.  She praised him saying, “good boy!”  But he was NOT a good boy!  He had just killed my chicken!  The furious anger began boiling inside me.  I began imagining that this woman had sent the dog over on a mission to kill, that they were conspirators.  With all my being, I wanted to go over there and tell her what her dog had just done!

But I didn’t.  I couldn’t.  I knew that, had I marched over there right then, I would not be able to control myself.  I would scream and yell and cry.  It would not be pretty.  So I decided to wait; at least I knew where he lived.  Instead I went in the house and grieved and prayed and calmed down.  My son was not home, I would be picking him up in a couple hours.  My heart ached for him, for the pain he was ignorant of at current, for the bad news I was going to have to tell him.  We had just been talking the night before about the unique relationship Woodchip had with us, with Nic.  None of the chickens we buy after the coop is finished will have the experience of living in our house and, thus, the same level of dependence on him.

After a while, I knew it was time to confront the owner of the dog.  I left earlier than I needed to pick up the kids and walked up to her front door.  I explained to her what happened.  She was horrified and extremely apologetic, offering to do whatever she could to alleviate the problem and promising to fix the fence ASAP.  We exchanged phone numbers and I left feeling glad that I had waited until I could talk to her calmly.  It was good for my son too.  His anger and pain, though still present, were curbed immensely by the fact that I had spoken with the woman and the content of her response.  I’m not sure it would have been the same had I spoken to her in my anger.

I began to feel proud of myself for the patience I exhibited.  The time I had given myself in order to talk in a calm manner to the woman who had offended me.  The godly testimony I prayed that I showed her.  Then it hit me — for this single act of self-control, how many times had I been impatient with my own children!  How many times had they offended me in some way resulting in an immediate attack towards them.  In concern for this stranger, I had waited.  But what about my concern for the children God had entrusted to me?  The sting of conviction was biting!

Above all, I am called to give my family the same grace that God gave me when He forgave all my sins at the cross.  To show the same mercy He shows me, a sinner who fails every day.  I know God has called me to love my children; to care for and nurture my children, and I cannot exhibit this when I am blowing up at them!

Now what?  What do I do to change?  I often tell my children that when temptation hits they need to flee.  When brother or sister is irritating them so bad that all they want to do is react negatively; flee.  When they feel the wrong reaction lurking at the door; flee.  Take time to read God’s Word and pray.  That’s what I did with this woman and that’s what I need to do with my children.  Get away for a minute of solitude and pray, recite God’s promises and ready my heart to talk peacefully to my children.  After all, that’s how I want them to treat each other, so I must model it.

Being faithful to bible study
Recognizing God's Grace in the Midst of the Desert
Should I read the whole bible?