How NOT to Endure Trials {Finding Hope in the Waiting} 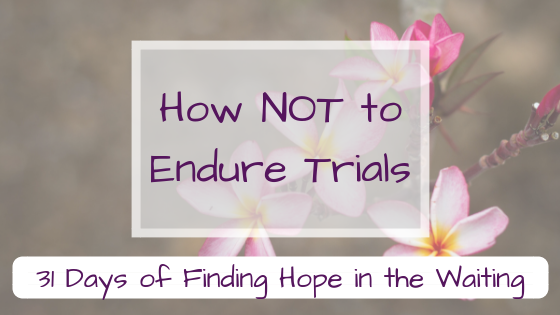 Yesterday we saw that we are to wait upon the Lord in the midst of trials.  Psalm 27 says, Wait for the Lord; be strong and let your heart take courage; yes, wait for the Lord.”  In times of despair and suffering we are to bring our requests before Him and know that He is faithful to deliver us.  Sometimes I find the best examples of how to follow after God are from the people who did it the wrong way.  There is just such a one in 2 Chronicles 28.

Ahaz was a king of Judah who lived during the time of Isaiah.  His father and his grandfather both did what was right in the eyes of the Lord.  But, for whatever reason, Ahaz did not.  He instead followed after the ways of his neighbor, Israel, which meant he served the Baals.  He burned incense and sacrificed to them on the high places and under every green tree.  He also sacrificed his sons to the false gods, a practice which was reprehensible to God.  Because he did this, God gave him over to devastation from other nations.  They came in and warred against him, inflicting great casualties and carrying away a great number of captives.  His kingdom was in trouble, and, as you can imagine, this was incredible distressing.

What do the psalms of David (which he would have had) say should have been his reaction?

My soul waits in silence for God only; from Him is my salvation.  He only is my rock and my salvation, my stronghold; I shall not be greatly shaken.”  Psalm 62:1-2

However, Ahaz was not a God-fearing man.  He turned to the world for help — namely the King of Assyria.  But this was not a good person for Ahaz to place his trust in, for he afflicted Judah rather than strengthening it.  King Ahaz, however, was not very bright.  He did not make the connection that all this destruction was from God because of his unfaithfulness.  He instead said in his heart, “the Assyrian’s gods helped them beat me, so I will sacrifice to them and then they will help me too.”

So Ahaz started running around frantically building altars for the gods of Damascus on every corner of Jerusalem and in every city. He took the utensils out of the Temple and used them in the building of these altars. He even boarded up the Temple so no one could get in. He was desperate, yet for all his running around and trying to do the right thing, nothing was accomplished. His country was not blessed and when he died he was not buried in the court of the kings. His running was in vain — striving after the wind!

Sometimes we do this same thing. We may not be building places of worship to other gods, but we are desperately seeking the world’s solutions to our trials. We are not communing with God (which causes problems already) and we get ourselves into difficult solutions. We feel hopeless and at the end of our rope.  We are frenzied and don’t realize that we have turned to the world for answers instead of to the only one who can truly help us.

When circumstances seem hopeless, this Song of David is my prayer and my hope.

I waited patiently for the Lord;
And He inclined to me and heard my cry.
He brought me up out of the pit of destruction, out of the miry clay,
And He set my feet upon a rock making my footsteps firm.
He put a new song in my mouth, a song of praise to our God;
Many will see and fear
And will trust in the Lord.

What psalms do you turn to in trials and difficult circumstances?

So, how should we respond instead?  Read the following two posts to see that our response should be in prayer and in worship. 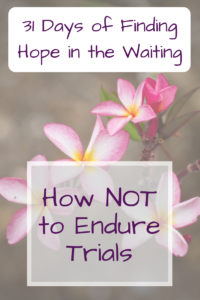 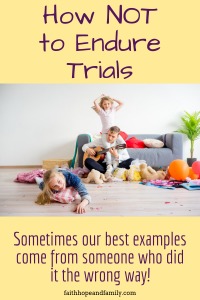