Seasons of Chaos and Learning to Forgive 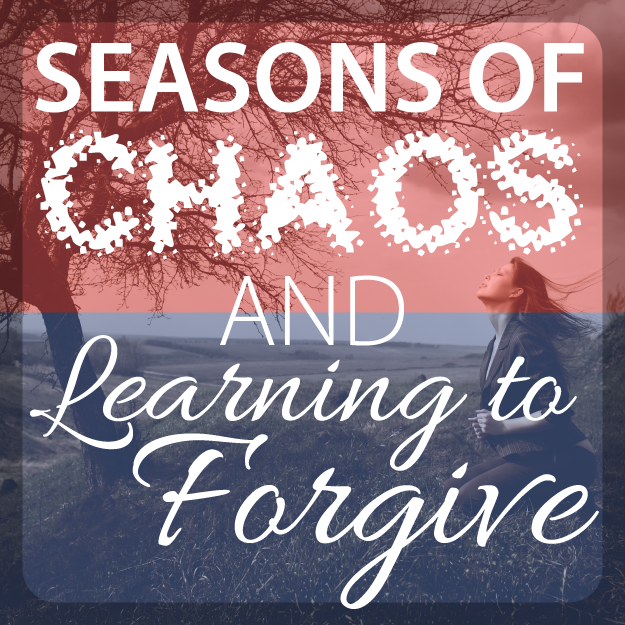 I wrote this article a month ago, but never posted it.  I was barely handling the hectic-ness of my life, let alone being active on the blogosphere.  Life is starting to calm down (though I don’t know for how long) and I know I need to start writing again.   Sorry for being gone so long.

Sometimes in life you have to make hard decisions. You know, the ones you don’t really want to make and you wouldn’t choose to make if circumstances were different. It has been a particularly difficult season of life for us. If I were to put a title on this season, I would call it, “Life Interrupted” because, for lack of any better words, my life keeps being interrupted.

Where we are in life right now is a result of a hard decision we made two years ago. We were in a house that was much too small for us. Eight of us in a three bedroom, two bath, 1400 square foot home. Now, to be fair, small can be endured if there is adequate storage space; our house was not one of those places. Yet, we endured it for ten years. It had one worthless closet in each of the bedrooms and that was it. There was no garage, no attic storage. There wasn’t any “bonus” space beyond the livable space. So all our linens and games and keepsakes were stored in the tiny closets that were shared by three children each. We homeschool, so add school supplies and books for six children to the normal household needs and you’ve got a picture of all that we stuffed into that house. Closets were crammed full, every inch of wall space housed a piece of furniture necessary for life, and every piece of furniture had something sitting on it. I became really good at organizing and reorganizing in order to fit everything in a place so my house appeared to have a general sense of order. It was difficult and we were on top of each other all the time.

We were at a place where we could afford something bigger, but we couldn’t afford the interim. Selling would be impossible in it’s current condition. The house was so packed full of stuff that no one would be able to see it. Nobody would buy it looking like that. Moving out was the only option, but we didn’t have the income for two house payments. We were stuck between a rock and a hard place. Finally, after much prayer and contemplation, we chose to move our family to a “temporary” location — the very large, and unused basement level of my parents house. We put all our household goods in two 10×12 storage units (imagine all that stuffed in my tiny house!) and moved ourselves and the few things we would need for the next six months or so until our house sold.

Then we listed our house for sale and waited … and waited … and waited! It was a tough time for real estate and mine was not moving. Finally, six months later, we had an offer and we were thrilled. Then, suddenly, days before the sale was to be final, it fell through. Our dreams were smashed before our eyes. It took me about a month to get over that devastating news. I had been doing school in this temporary location and was completely unorganized. While the level were living in was twice the size of our old house, it wasn’t mine. I couldn’t change it to fit the needs of our family. Besides, it was just temporary, as soon as our house sold we would be moving on. I had looked forward to starting a new school year in a new place, and now I had to figure out how to make the best of it here in this place.

We endured a long winter of showings that were few and far between. No action. Finally, the next spring we got another offer. Joy! And then, another devastating loss as the deal fell through, again, just days before closing. You might imagine the feelings of hopelessness that ensued. All my hopes and dreams crashed to the floor. I was stuck. Again. We relisted, but there was very little action. Nothing was happening.

Add to that, my parents, who had been considering selling the monster of a house we were all living in as they no longer needed (nor could really afford) this much space. After we had been there a year, I told them to go ahead and list it; I didn’t want to rob them of any more time. I knew God would take care of us. We considered moving back, but we all knew we couldn’t go back there; it was just too small. They didn’t want us to go back, just as bad as we didn’t. So we stayed and kept trying to sell our house.

For awhile, living in a house listed for sale wasn’t that much of an inconvenience, we cleaned it and moved a lot of stuff out of it into storage. There were a few showings and we worked around them. But then this spring hit … And it hit with a vengeance!! There have been an average of two showings a week! Which means I have to stop my life, and my kids school, put everything needed for life away somewhere and make sure the entire 5000 square foot house is in pristine showing condition. I feel like my life is in a constant state of chaos; I don’t know if I’m coming or going or where anything is.

Last winter we took on renters in our little house hoping that would help us to be able to move on. We did everything we were supposed to: called references, made sure he had an adequate income, called his boss. Well, January comes and he loses his job and gets thrown in jail for a couple days as a result of driving on a suspended license. What!?! Promises of money to come soon. Promises, always promises. Soon, it became clear that they intended to live in our house that we had been trying desperately to sell rent free! So, add to the stress of living in chaos, the stress of trying to evict a tenant.

I say all that to explain where I am in life right now. I feel like a woman slammed on all sides with heavy blows. They just keep coming. And, for a while, I was giving in to them. The pressure of living in someone else’s house with six lively children, trying to keep it perfect so it would sell, deal with uncooperative tenants, and attempting to maintain a semi-normal routine so my kids could finish school was mounting up on all sides causing me to be on edge constantly. I was a monster to my children. It got to a point where I could feel the stress and anxiety were really taking a toll on my body as I felt like I would explode at any minute. I knew I had to get a handle on it or I would make myself sick.

I had spent a lot of time in prayer but I felt like it was all in vain. I didn’t understand. Until one morning, I was praying trying to get my heart right and God revealed something to me — I was angry. I was so angry. I was angry at my circumstances. But mostly I was angry at my tenants. They had some nerve treating me this way!! They had now started ignoring my calls and pretending they weren’t home when I came by. They live in my home!! Do you know what God told me … I had to forgive them!  I had to forgive the sins these people were committing against me while they were still committing them!

When I realized that I started crying; I didn’t want to, but I also  knew that’s what I had to do. After all, He forgave us while we were still His enemies and that’s what He asks of us. It’s also what I’m trying to teach my children. So I prayed for strength to forgive them, because I knew I would not be able to do that on my own.

God answered. He helped me forgive them. Can I tell you something incredible! That was a game changer! I am a different woman since I did that. I am still moving on with the eviction process and have hired a lawyer, but I am no longer angry at them.  The anxiety that was plaguing my soul has vanished.  I have peace.  I know God is in control and it will all work out in the end.

Remember that God is Faithful
Six Actions that will help you Endure a Hardship without Losing your Mind!
New Beginnings