With the threat of great trouble looming over them, Jehosophat and all of Israel, small and great, gather before the Lord in fasting and prayer.  We looked at that prayer here.  They are looking to the Lord in expectation for deliverance.  They know God is true to His word; that those who come before Him in humility, with a sacrifice of worship and thanksgiving, will not be forsaken (Psalm 50:14-15).  But how will He answer?

God is sovereign and his timing is perfect as He chooses to answer prayer on His own timetable.  On this day, He chose to answer right away.  He put His Spirit in a Levite of the sons of Asaph who gave the word of God to the people.

Do not fear or be dismayed because of this great multitude, for the battle is not yours but God’s.  Tomorrow go down against them…You will not fight in this battle; station yourselves, stand and see the salvation of the Lord on your behalf, O Judah and Jerusalem.  Do not fear or be dismayed; tomorrow go out to face them, for the Lord is with you.  2 Chronicles 20:15-17

Our response to the promises of God should always be in worship and thanksgiving. Click To Tweet

Today, God does not speak to us through prophets, but through His scriptures, the complete revealed Word of God.  When we lift our concerns to God and read the bible we should praise Him for His greatness.  Philippians 4:6-7 says, “Be anxious for nothing, but in everything by prayer and supplication with thanksgiving let your requests be made known to God.  And the peace of God which surpasses all understanding will guard your hearts and minds in Christ Jesus.”

The next day the people of Judah rose early and went to the wilderness to prepare battle lines as God directed.  Jehosophat said, “put your trust in the Lord your God and you will be established.”  Then he appointed those who sang to the Lord in holy attire.  They said, “Give thanks to the Lord for His lovingkindness is everlasting.”  The people of Judah showed their faith in God by worshiping before God saved them!

When they began singing and praising, the Lord set ambushes against the sons of Ammon, Moab, and Mount Seir who had come against Judah so they were routed…when Judah came to the lookout…[their enemies] were corpses lying on the ground and no one had escaped.” 2 Chronicles 20:22-24

Because of the ambushes, there was confusion and the three nations whose intention was to war against Judah instead turned against one another.  They destroyed each other completely!  The Lord saved them that day and they did not even have to lift a finger!

He saved Judah when their hearts were completely submitted to the Lord their God in worship and thanksgiving!

I pray this would be an example to us; that we would humbly bring our concerns before the Lord, with thanksgiving of His blessings.  That we would faithfully wait for His salvation.  May our hearts say with David, “I waited patiently for the Lord; and He inclined to me and He heard my cry.  He brought me up out of the pit of destruction, out of the miry clay, and He set my feet upon a rock making my footsteps firm.” 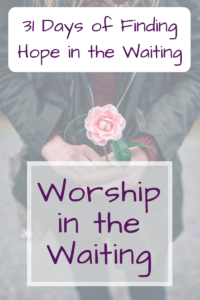 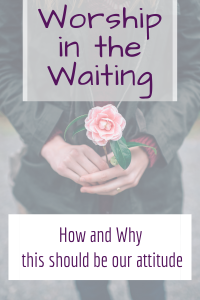